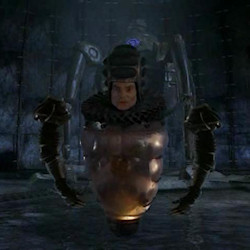 He is a mysterious biovisor from Cluster, an unknown capital of the prior insect civilization. Only possibility of performing mutation with him proves that this ancient race still exists somewhere, and that not all of its mysteries have been solved.

From level 1, he allows you to build a Dunkleosteus from an Insectoid Entity.
Ability to build Gigalord from the 2nd level.
He has a positive effect on Destruction of the units: Lexx, Usurper and Gigashadow.
He also gives a bonus to the speed of such units as Gigalord , Gigashadow and Lexx.
+10% of Structure of planets per level.
From level 10 Insectoid Entity sees all the fleets, including the enemy, which fly to any satellite on the coordinates where it is located.
+1% to the power of Gravity Gun per level.
Mantrid decreases amortization by percentage equal to square root of the level of Mantrid.
He increases the amount of resources collected under dominance.