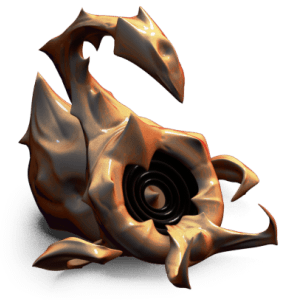 200 0001 100 00050 000CRP 2
The transformation of the moon into a living organism that could move along with the fleet on solar systems was an old dream of the Overmind. Living beings, able to live under the surface of the moons were born because of complex mutations, and you can manipulate them. In billions of numbers, organisms create directional vibrations under the surface of the moon, allowing it leaves orbit and begin free movement through space. Moving occurs as a series of preparations for jumps and jumps at regular intervals between large objects. It may collide with other satellites during these jumps. The maximum distance of one jump is 1500 ckm.

More >>
With the development of the entity, the speed of jumps increases significantly, and the consumption of vespene is reduced by the formula 4000 / 1.1 raised to the power of level. Inside the solar system, entity flies from the planet of start to the sun, and then from the sun to the planet of destination. Between solar systems, entity jumps, clinging to the gravitational field of the sun. On arrival to the destination, the entity needs a rest during 14 days / level.

When you transform the moon into the insectoid entity, the base density of the object is reduced by 2 times.

It does not occupy fields.
The first level can not be destroyed or devoured by Lexx as a result of the “Devouring” order or with the help of nuclear weapons.
Entity sees all fleets, including the enemy, that fly to any satellite on the coordinates where it is situated if there is Mantrid from level 10. The entity can sense other entities at LC.
Comparison by level
Дерево эволюцииОписаниеСправочник
…