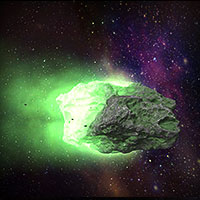 A comet is a randomly appearing object with diameter from 13 to 33 km, that spawns at random local coordinates with a movement speed from 0.05 to 0.5 km/s. Comets are mostly composed of gas, amounts of which depends on the size of a comet.
Information about the comet can be obtained in expedition or it can be discovered by chance.

Comets cannot be colonized, but fleets with “Defense” and “Recycling” orders can be sent there. Units with Recycling ability in a fleet with corresponding order will harvest Vespene gas from the comet. Harvesting speed is equal to recycling speed, multiplied by [comet diameter]/50000.

The comet can be slowed by the gravity gun's beam. Harvesting speed is slightly increased on comets that are slowed down.
Comets are constatnly losing structure and dissipate in about 1000-3000 hours after appearing. If the comet is taking structure damage, that time will be reduced. In case of destruction or dissipation of the comet there would be no gravitational wave, so fleets on the comet would not be destroyed.
Дерево эволюцииОписаниеСправочник
…