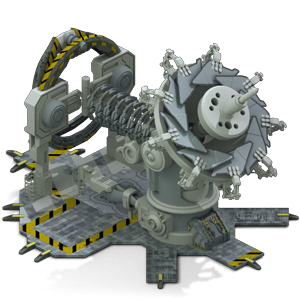 40 00020 00010 000CRP 1.5
High-frequency sensors look at the radiation spectrum and powerful computers combine the tiny fluctuations in energy to provide information about someone else's fleets holding, warming-up or flying to a planet of scanned coordinates after warming-up.

Scanning is done through the galaxy map with a gas consumption using the formula [root of phalanx level] * 1000 * [root of distance].
Emperor can analyse better, obtaining data at a greater distance and not only from planets (10% for each level of officer).
Unable to scan:
- objects that have a Level 7 Neural Core on them,
- objects and fleets of a weak player,
- fleets with an Arbiter in them.

Sensor range is calculated by the formula [phalanx level] * 100 ckm. The phalanx sees insectoid entities and dunkleosteus within the same radius.
Evolution treeDescriptionCatalogue
…