The Bugs forum thread is not just for reporting bugs to the administration. It is intended to solve technical problems encountered in the game. Before creating a topic, you should check to see if there is a topic with the bug that you want to report. In order to report bugs or glitches, you can create a new thread instead of writing in the existing threads. Topics with the title Bug, Glitch will not be considered. Try to put a brief description of your problem in the title of the topic. If the problem described above occurred on another account, be sure to specify the account where it occurred.
Responsible: N/A

Ships not Under FAS 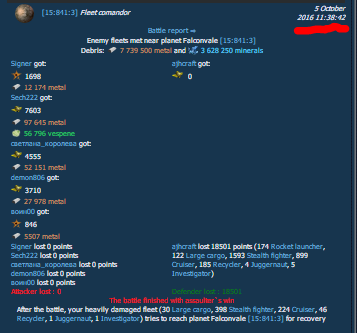 http://xcraft.net/battle/index.php?battle_id=252ea7c09bc746773da8ff0dbbd30082
When this attack happened, my ships had been on my planet for 1 minute and 10 seconds. They should have been under FAS because of the rule: " The system turns off automatically:
- if your own fleet landed the planet a minute ago (disabling affects only the fleet which has returned) " so they should have been under FAS, and I checked, the FAS on my planet was enabled.

Also, when they attacked together, their combined points was 1.2 million points. Due to recent changes in the rules, players with combined score of 850000 points cannot attack me.
They attacked with a combined power that is far over what the game allows for me to be attacked by, and if they attacked separately, but made sure the time was the same, that is bypassing the rules of the game, because they, together, are way too strong for me to be able to defend myself.

dimitrisnik24, No, I looked to make sure before I posted this up, the FAS was enabled

You underlined the time of the end of the battle on your screenshot, this battle started at 11:37:25, you can see it in the battle report http://SSMaker.ru/c24e28f2/
Your fleet returned at 11:37:32 and took part in this battle.
It is not a bug.

wierd it doesnt show at the battle report that aiz fleet enters the fight at 12sec etc http://prntscr.com/cq8uji

Victoria, Ok, well there is still the issue of the combined attack

ok from what i understand they can attack you if their indiviuall and their points dont exceed yours as a player so that means even 10 attacks of 400k scores each attacks you it only protects you from single attacks that  are way biger than you and see you as newbi player green status thats all attacks that hapening from allot of ppl are valid they didnt disable that just made it harder for a 1.5m player to attack you only on hes own

CAS points are not in consideration. Players came with different attacks.
«  · Bugs ·  »