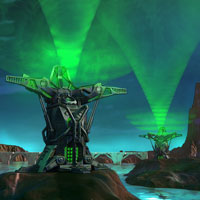 Long before the shield generators became small enough to be used on ships, there were already huge generators on the surface of the planets. They enveloped the entire settlement with a force field that could absorb shots. Attacks of small fleets can be fully deflected by these shield domes. Thanks to the growing technological development, the shields can be further strengthened. Later, it will be possible to construct a Large Shield Dome with much stronger shield. On each planet, only one Small Shield Dome can be built. After destruction in combat, the shield dome will self-recover with a probability of 70%.
An unlimited number of them can be built at orbital stations (satellites with diameter 100 km or less), where they protect the structure of the object, strengthening it with their shields. When an object is damaged, these outer shields will be destroyed first.
Characteristics
Specialization
Mass attack
Дерево эволюцииОписаниеСправочник
…