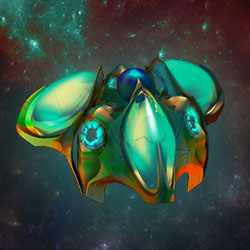 Giant interstellar flagship, customized for battles with the flagships of other races. Thanks to the concentrated power of the shot, it has tremendous attack power. Fewer cannons reduce its area of damage to small ships. By concentrating the laser beam and changing its string vibrations it can destroy the planets. Starting level 10 of elder Meskhalaj the basic speed increased.
Abilities: