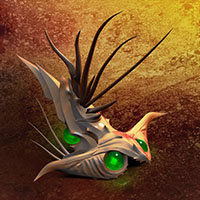 On one planet xerj found a strange plant. It was shooting its spikes with seeds at asteroids rotating over the planet by great numbers and breeding this way. These genes entered the gene pool of the swarm and formed a powerful defence of the infected worlds. Needle tree became a real nightmare for small ships. They punched through them in large numbers. Needle tree has become a danger for medium and heavy class ships because the shields cannot keep so thin penetrating force.

More >>
Acid that falls inside the living units of the penetrating needles causes terrible pain, so xerjs try not to attack the planet, with such fortified colonies.
Ignores shields.
About 60% of destroyed Needle Trees can regenerate by themselves after a fight.