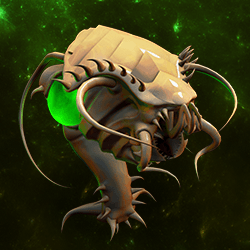 In the endless devastating battles with steel giants, swarm forces suffered huge losses. Overmind in order to protect his children, used the mutation of the unit Flaming Worm and take from it the storage capability and the power of the shot. Applying the principles of flight of a Mudkip and rapidity of attack, Father of Swarm revealed to the world a new terrifying creature. Usurper charged while being on the surface, filling with toxic gases. Since the beginning of the battle he runs inside its huge glands extremely complex synthesis of dangerous substances, going for a while.

More >>
The result of the synthesis is the formation of highly corrosive, high-temperature substance, instantly burning through even the strongest armour. Before shooting the body of the Usurper sharply compressed and half-standing content is emitted to the side of the enemy army through the front opening of the flying worm. Then the Usurper saving his strength rotated 180 degrees and shoots the remains of its contents through the anus. Clouds of gases emitted at the same time have a size of a small asteroid. They are able to completely cover the whole armies, causing enormous damage. Damage from Usurpers increases with each level of Acid Evolution.

Hire mutant Worm Lord of level 10 and increase basic speed. Each level of this mutant increases the speed, shields and armor by 10%.
Abilities: