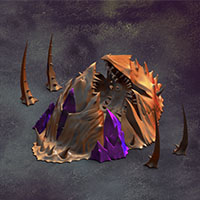 Not deep under the crust, the planet is inhabited by the beetles which is much smaller than many members of the swarm, but their manner of attack makes the moles less vulnerable. During the defense they protrude from the ground to make the shot and immediately hide. This allows them to attack only every odd round, but saves them from being hit. However, for the digging of holes these creatures need a large amount of Hydralisks.
About 60% of destroyed moles are self-restorable after the fight.