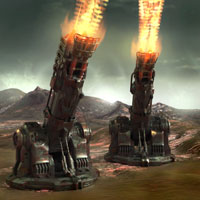 For a long time artillery guns were considered obsolete against the background of the development of modern laser and ion technology and constantly improving protection, until new research in the field of energy technology allowed to raise artillery to a qualitatively new level. The principles of electromagnetic mass accelerators have been known on Earth since the 20th century. One of them is the Gauss cannon.


More >>
After overcoming a lot of difficulties, its use as a weapon became a reality. Multi-ton shells are accelerated by a magnetic field with huge energy consumption and have such an output speed that dust particles in the air around the shell burn, and the sound wave shakes the ground. Even modern armor and shields can barely withstand the penetrating power of the Gauss cannon, and it often happens that the projectile passes clean through the target. Defensive installations deactivate themselves, as soon as enemy severely damages them. The possibility of restoring defenses after the battle is about 70%.
Characteristics
Specialization
Mass attack
Дерево эволюцииОписаниеСправочник
…