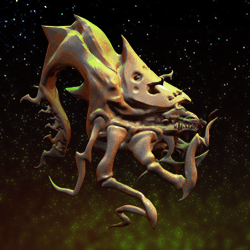 As genetic pool of the Swarm grew, the Overmind ordered to incorporate the most vile and toxic insects and parasites found into it. Controlling such numerous creatures with Overlords was virtually impossible, so new types of agents were created to use the advantage of insect swarms on the battlefield. Defilers carry most useful insects and launch them into combat. They are not able to deal damage on their own, all their attacks are abilities. But swarms of their symbionts significantly help the allies, in defense as well as in attack.
Plague ability is used instead of a direct attack and gets the same bonuses to power as the attack.