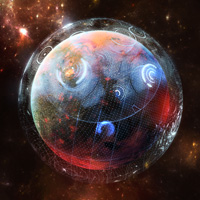 A huge dome that protects your base on the planet and which can be normally built only once. It creates a shield that covers other defenses during the battle. The shield is huge, but only 50% of it is restored each round. Bunker Level 10 allows you to build 2 domes. When destroyed, it will restore itself with a probability of 10%.

On orbital stations (satellites with diameter 100km or less) you can build an unlimited number of domes. In addition to protection in a battle, they protect satellite's structure from damage as a result of collisions or shots of a gravity gun. When causing damage to an object, the protection domes one by one will be destroyed first.
Characteristics
Specialization
Mass attack
Дерево эволюцииОписаниеСправочник
…