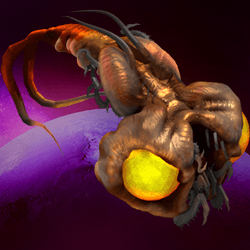 Lexx, the most powerful weapon of destruction in the universe. With valuable information of prior race of insects, the Overmind was able to create the symbiosis of organic and technological, cybernetic. Thousands of infected scientists were able through direct contact with the Brains of the great ancestors to make Herculean efforts to the perversion of their mind. The result: Lexх - huge flagship biorobot, which is a giant space beetle, inspiring primal terror by its size and animal hunger. To move it uses some fuel, occasionally feeding by organic substances from inhabited planets and satellites.

More >>
The speed can be increased with the help of mutant Celestial Shadow.

For the Lexx construction you need human scientists, therefore, to build Lexx you need to infect the Humans lab using Queen (levels of infected laboratories are summed).